Recently I've been building a proof of concept, the brief was simple...

"Come up with a way for my team to collaborate with people outside the organisation on large Word document. At the moment, we tend to email them between us, which can degenerate into a nightmare."

Our approach was to think about breaking these large documents down into small sections which could be assigned to individuals for authoring and/or review. These sections could then be reassembled into a single document for printing.

To build this proof of concept we used TiddlyWiki and jQuery. The latest release of TiddlyWiki (2.5) includes jQuery (1.2.6) so this provided a fine opportunity to explore the new potential.

So here is the demo,

The online demo does not demonstrate the iGoogle integration of TiddlyDocs.   The iGoogle integration showed how we could provide a personalised view of the sections assigned to each user.  While we used iGoogle for the original demo this portlet just contains HTML so could be embedded into any portal framework which supports HTML.

PSD wrote some XSL-FO to translate the generated HTML into a printable PDF document. Paul's code can be found here. 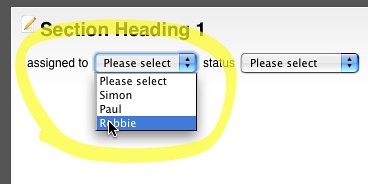 Allows each section to be easily assigned to a pre-populated list of users. 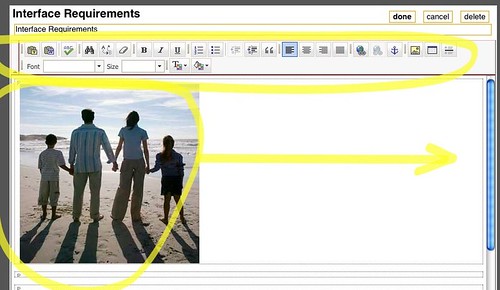 Allows users to edit the document content in a familiar word style environment.  Also allows content including images to be pasted in the textarea from the clipboard.

The iGoogle integration allows each users to have their own view of all the tasks assigned to them. This can be used in various portal frameworks.

Easy view of the documents status 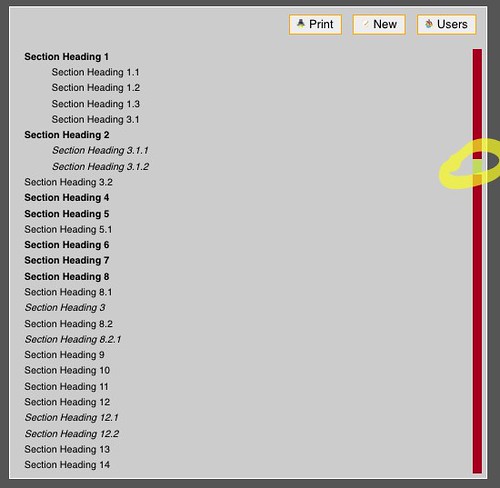 The bar to the right of the table of content shows the status of each section. When the bar is completely green the document is complete.  This example demonstrates that only one of the sections has been completed.

**Each Section Allows for Comments
** 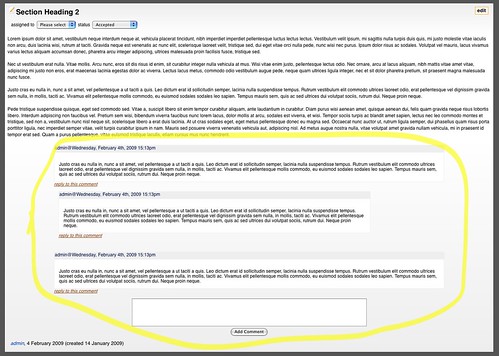 Each section allows multi-threaded comments which will not be printed in the final document.  This allows for conversations to take place around each section of content.

We were able to build this proof of concept so quickly by reusing open source code that is available in the TiddlyWiki and jQuery communities.  Below I talk about the components that make up TiddlyDocs.

Every time the document is re-arranged the specification tiddler is saved.

This is the other plugin which I wrote specifically for the demo.  This plugin can read the document specification, collect the data from each of the required tiddlers, and then generate a static html file on the server which can then be converted to PDF for printing.

Provided by Eric of TiddlyTools, the singlePageModePlugin ensures only one tiddler is viewed at a time.

Allows users to post comments against individual sections. These comments are presented as a threaded discussion, allowing rich conversations to take place around the content.  Thanks to Michael Mahemoff for this plugin who also helped with the demo.

Taken from Phil Hawksworth's TeamTasks, this allows the fields provided by TiddlyWiki to be used to store information about ownership and current status.

**FCKEditor
**
FCKEditor is a project to make a nice WYSIWYG editor from any HTML textarea.  I have to say a I have been very impressed with FCKEditor.

A TiddlyWiki plugin that makes FCKEditor work nicely with TiddlyWiki.

This demo is hosted by ccTiddly but its been written to work on TiddlyWeb and any other server-side implementation of TiddlyWiki.  Over the next few months I will be working on TiddlyDocs to prepare it for easy consumption.

Updated : Michael Mahemoff has produced a screencast talking through the features of this demo :  http://vimeo.com/3109248

previous post:Offline is back Online next post:My Recent Contribution to the House of Lords Information Committee